Join us for two days of theatrical presentations by some of metro Atlanta’s best theater companies. 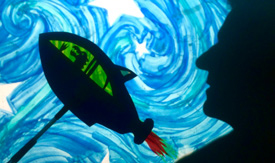 Damon Young’s original shadow puppet shows and artistry enliven schools, libraries, theaters and sound stages across the southeast. He is the founder of Theater Arts and Puppets, a teaching artist for the Georgia Council for the Arts and the Fulton County School’s Teaching Museum, as well as the lead teaching artist at the Center for Puppetry Arts.

The August Wilson Monologue Competition for Metro Atlanta high school students, grades 9-12, focuses on the plays of August Wilson’s American Century Cycle, which chronicle the African American experience through the 20th century. Each student will perform a 1-3 minute monologue from one of the ten plays in August Wilson’s Century Cycle.

Kenny Leon’s True Colors Theatre is a nonprofit theatre based in Atlanta. Its mission is to celebrate the rich tradition of black storytelling while giving voice to bold artists of all cultures.

“Midsummer, Jr.!” presented by the Atlanta Shakespeare Company. This high-energy adaptation of Shakespeare’s classic A Midsummer Nights Dream uses puppets, live music, and silly props to help bring the story and characters to life for all ages.

ASC is a company of actors, technicians, and educators committed to saving the world through iambic pentameter using audience interaction, authentic Elizabethan-style costumes and sets, and a heightened appreciation for Shakespeare.

Sit in on a special Decatur arts critique session. In this program, modeled after Working Title’s bimonthly Monday Night Critique Sessions, a group of Atlanta actors will read aloud selections from brand new scripts in progress, and share feedback for the next draft. Come enjoy exciting new stories, and add your own voice to the creative process!

The New African Grove Theatre Company (NAG) is a community theatre founded to encourage African American participation and involvement in all aspects of theatrical production. NAG has produced and presented theatre in the metro Atlanta area for 10 years. They have participated in festivals around the country. Last year, they joined the ranks of the theatre companies that have produced all 10 of the plays in August Wilson Century Cycle.